Due to its prohibitive cost, HAPL was forced to to drop the Chilton Auto Repair online database, but there is an alternative database (Auto Repair Source) available by clicking the link for POWER Library on this website.  The library's book collection includes many past Chilton manuals, although the titles have ceased publication in hard copy.

Library News for the Week of July 13

Curbside Pickup Hazleton & Branches
During a portion of the state's Green Phase, the Hazleton Area Public Library and branch libraries will remain closed to the public. The main library and branches in Conyngham, Freeland and Nuremberg will be providing Curbside/Lobby Pickup.

Patrons can call the local library to schedule pickup. You may also submit a Google form and order materials online. The form can be found on our website (above in this article) and Facebook page (@hazletonlibrary).  Each form is location specific.

During this closure, patrons can only reserve/check out materials from the pickup location. Patrons cannot reserve materials from other Luzerne County Library locations at this time as there is no delivery between libraries.

Hazleton (Main Library) is offering Curbside Pickup from our Mobile Printing Station. For instructions and assistance, either call or search our website (above)/Facebook page. After sending, please give the library a call during business hours and a staff member will confirm your printing and schedule a pickup time during the call. Printing costs 10 cents a page and printing is black and white.

Staff will be available during our regular business hours at each location to answer questions, take curbside pickup requests, and receive honor and memorial book requests.

No donated materials can be accepted at this time. 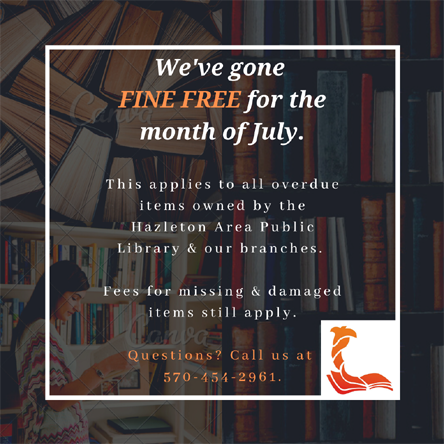 Library News for the Week of June 29

Stay tuned to this website, the Standard-Speaker, and Facebook for exciting news about the virtual summer programs we will be offering. At this time, we continie to provide curbside pickup for items. See below for details. We hope to see you soon!

Memorial Books
The numbers game, in memory of Anna Belko, from Angela Daniele.

Our dogs, ourselves, in memory of Patricia Bitel, from Rose Greschner.

The sons of Molly Maguire, in memory of Edward “Tex” Bradish, from Jean Bradish.

Start with your people, in memory of Rocco Colangelo, Jr., from Benny & Nancy Tranguch.

What makes a wine worth drinking, in memory of Helen Eroh, from The McBride Family.

Boxitects, in memory of James F. McGill, from Hajoca.

The Cartiers, in memory of Edith Rigotti, from Lorna Veglia.

The Lion king, in memory of Simba, from Ronald & Sharon Maue.

Ten innings at Wrigley, in memory of Richie Yaniga, from Neil & Nanette Palumbo.